Vaccines are effective in preventing infectious diseases. Vaccine development is complex requiring multiple steps (Welcome). In general it takes 10 to 15 years to create and test a safe and efficient vaccine against a new disease (movie CBG in Dutch). The current vaccine developments have some challenges that previously showed to be too difficult (Herzberger).

Russia (Lugonov + reaction) and China (Xia) are using COVID-19 vaccines, less than a year after the discovery of the SARS-2 virus. According to Western countries these vaccines were not tested well enough for for efficacy and safety in humans. Currently 38 vaccines and 158 treatments are being tested, most in lab animal tests, 47 in early clinical studies and 9 are evaluated for efficacy (Kommenda). Are we on the verge of a safe and effective vaccine? I argued differently in Dutch newspaper and when advising the Dutch government (Figure 1)?

Figure 1. My doubt on the rapid development of SARS-2 vaccine, by comparing to SARS-1 and MERS, expressed in a Dutch national newspaper (Volkskrant)

The WHO has already postponed the launch of vaccines until mid-2021 due to a lack of confidence in their safety. They are not alone in doubting safety of COVID-19 vaccines. However the Dutch  minister of health buys vaccines because of great confidence (Figure 1). Thanks to the Brexit, the United Kingdom could and desired to allow any vaccine. In the European Union, the EMA adherence to the most strict demands. What causes such different approaches? Why is there so much precaution on development of a vaccine that could save the world from an epidemic? 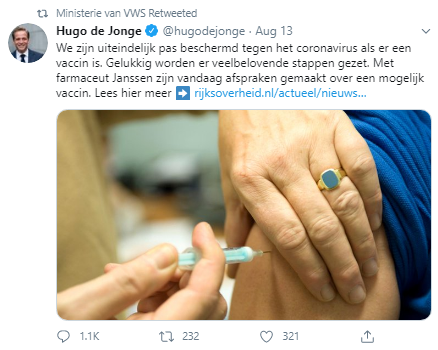 Corona viruses induce strong immune responses with many antibodies against their Spike protein. Mostly, these are neutralizing antibodies that prevent virus infection in their default target cells, but could cause infection in leukocytes (Jacobs). Most laymen may consider a strong immune response as perfect, but for immunologists this arouses suspicion.
​
Why would a virus trigger a strong immune reaction that would clear itself? Well, clearing SARS-2 by the immune system is not very efficient. Patients become seriously ill because of their immune responses, but not all virus seems to be cleared. COVID-19 related mortality is due to strong antivirus immune responses, but we’re still struggling to find the exact mechanisms of what goes wrong. This lack of detailed knowledge, is a major hurdle to design a good vaccine.

Animal test are reasonably well in predicting health effects in humans, but immunological research has found major differences between species. I noticed this during my PhD thesis on animal-free alternatives to screen contact allergens. Testing in guinea pigs and mice were less predictive than a piece of wasted human skin in culture. A few years later, immunologists were shocked because of extreme results in a study TGN1412 in humans. The antibody had similar affinity tot he protein in Java and rhesus monkeys, so the researches assumed it would be safe for humans too. However, the human immune system reacted much stronger causing a lethal immunological shock (sepsis).
​
Severe COVID-19 is deadly in humans due to the immunological shock, which has not been described or reproduced in animals. COVID-19 induces inappropriate and too strong immune responses, similar to SARS-1, MERS and allergens. Just to be clear, we do not know how to make safe and efficient vaccines for immune pathologies, neither for both viruses, nor for allergies. A similar problem with immune deficiencies like HIV (AIDS). Resus monkeys can be infected by SARS-2, but do not become ill (Deng). This raises the question whether it is a good model for human disease. The mRNA-1273 SARS-2 vaccine is tested in these monkeys and protects them against virus replication (Corbet).

Severe corona infections are documented in chicken and cats. Infectious bronchitis virus (IBV) causes symptoms in chickens similar to SARS-1 and SARS-2 in humans: both respiratory disease and the systemic shock. Vaccines are effective, but every year a new serotype evolves. This implies that last years’ vaccine has lost efficacy and requires the development of a vaccine against the new virus strain. This would be similar to influenza, where rapid adaptation raises vaccines with different efficacy.

Infectious peritonitis in cats (FIPV) is more severe. Different vaccines induced strong immune reactions in cats. However after virus challenge, the disease was not less in vaccinated animals, but more severe. Findings were similar for conventional vaccines and a DNA vaccine - both induced strong antibody responses. However after challenge with the feline virus, vaccination appeared to be detrimental for the cats.

How are COVID-19 vaccines tested in humans? Testing showed that young and healthy people have strong antibody and T cell responses, with only minimal side effects. This is analogous to the feline corona vaccine. However, vaccinated people are not yet, challenged to the virus. Normally, vaccines protect from disease, but immune pathologies should not be considered a normal immunological situation. It cannot be excluded that a vaccine could worsen the disease by amplification of the (wrong) immune response. This might very well depend on the type of immune response induced by the vaccine (Jacobs). It could also be that vaccines will safely prevent disease in young and healthy people with already an efficient immune response against SARS-2. But that would not imply implicitly that these vaccines would also be confer efficient protection in people that need them, like the immune compromised (elderly) with diminished cellular responses. So vulnerable people might develop inappropriate immune responses.

​I am glad with the cautious strategy of the EMA, that authorizes the EU medicines and vaccines. I hope the EMA will have a strong backbone against forces seeking short-cut COVID-19 vaccine approval in the Russian, Chinese or British way.
John Jacobs
​ 12 - 09 - 2020