Immunity against an infectious disease often, but not always, implies immunity against the pathogen (** sterilizing immunity). When 50% of the people cannot be infected by the virus, the effective R0 (reproduction rate) lowers with 50%. In case of an R0 below 2, this could result the fading out of the epidemic because of a reproduction rate below 1. In case of R0 of 4, this would be 75%. The real question is, do COVID-19 infections lead to herd immunity?​

​In the European epidemic, some countries were overwhelmed by COVID-19. Other nations, like Sweden and the Netherlands, opted for herd immunity as part of their strategy. Illustrating for this strategy is Israel, that choose to limit virus spread in the first wave and switched to herd immunity in its second wave. This experiment with the Swedish model caused a shocking disappointment.

​The generation of herd immunity is the natural end of an epidemic. A strategic based on herd immunity is only recommended if immunity also protects against a more dangerous virus as vaccinia protecting against smallpox. This is not the case for SARS-2.
Two conditions should be met to yield herd immunity:
It seems that neither criteria is met by SARS-2.

Immunity against disease, not infection

COVID-19 is an immune pathology – the immune response against SARS-2 is both too strong and quite ineffective. Paradoxically, the SARS-2 virus stimulates the immune system, as an effective immune response would eliminate the virus. Inducing cough and sneezing helps respiratory viruses to disseminate in the population. The SARS viruses have an unexpected evil master move.
​
The immune response in patients becomes so strong that it could kill the patient. It senses this, and turns itself down to avoid self-destruction of the host. Turning of the partially effective immune response, allows the virus to reproduce. Probable, antibodies could contribute to the dissemination of the virus in the body (Jacobs).

​Considering the severe side effects of SARS-2 immunity, it should not be too much of a surprise that it fades quickly. This was already suspected based on analogy with other betacoronaviruses, like the common cold viruses HCoV-OC43 & HCoV-HKU1. Some people get the common cold every year by the same viruses, because of strong decline in immunity after 6 months (Edridge). Studies showed that for SARS-1, antibodies disappeared after 3 years (Wu). The first indication of reinfection with SARS-2 are published, with 6 months after the first infection (Ledfort, Tillet, To, Mulder, Newsweek). The case does not suggest a milder second infection. It should be noted that this is the first case, so on average immunity could last beyond 6 months. Still it is clear that immunity is not everlasting, as with the common cold viruses.

Recently, it was shown that during 35 years, the 4 human coronaviruses - the causes of common cold - only induce temporary immunity. Antibodies wane after infection, and within a year a reinfection occurs. This will boost the immune system again for a short period.

​My previous calculations showed that almost 3 years are needed to build herd immunity in the Netherland, causing 100.000 fatal cases. However, if immunity is lost within a year after infection, this will never be established, and all the victims have died without a cause. Moreover, virologists consider building natural immunity against a virulent virus as an evil strategy. It implies choosing for as many fatal disease cases by the virus as possible.
In a nutshell, the generation of herd immunity against SARS-2 is ethically undesired and seems doomed to fail.

Overview of reinfection showing that these are not less severe: 24 cases with one severe in the first and five (one lethal) in the reinfection. 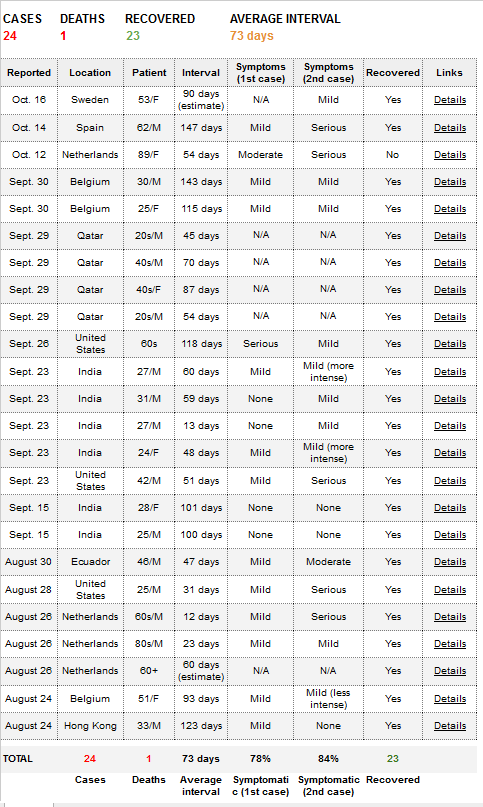