The infection mortality rate of COVID-19 is about 1% (Calculation). COVID-19 is a serious lung disease, but also a deadly immune disease (immune pathology). The immune disease is a form of sepsis (over-stimulation of the immune system) and resembles the deadly anaphylactic shock after overactivation of the immune system against an allergen.
​
COVID-19 mortality rates depend on age and health (Figure 1). Knowing that fatality rates in the elderly are about 1/3 to 1/2, we may conclude that the selective protection of vulnerable people against infection has failed. The data in Sweden are comparable.

COVID-19 damages society too much. Most western countries score poorly on all aspects of their fight against the virus. They top the ranking with deaths per 100,000 inhabitants. Countries from the 2nd and 3rd world have far fewer fatalities than expected. Most likely their familiarity with infectious diseases triggers them to fight the disease seriously. Currently the Western countries bet on vaccination to combat the virus. 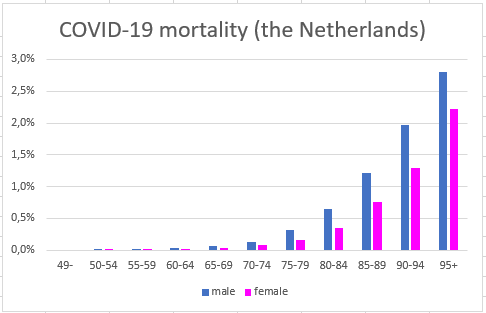 Figure 1. COVID-19 mortality in the Netherland per age group.
About 6.3% of the Dutch population is infected. The COVID-19 case-fatality rates among the 95+ are about 35%. Multiplying 35% * 6.3% would yield an infection rate of 4.2%, indicating that specific protection of the elderly failed in the Netherlands.

Is vaccination the best strategy?

"A vaccine is our best card," tweeted the Dutch minister of Health. This statement is not supported by evidence. Data show that the best results were achieved with the combination of (i) controlling the epidemic through a lockdown, if necessary, and (ii) fully limiting the epidemic through test, trace and isolate (TTI). In East Asia, Africa and Australia, regions with recent epidemic experience, TTI and / or lockdown were successful in controlling the virus.

Many European countries, including the Netherlands, successfully combated tuberculosis with TTI without vaccination. Mycobacterium tuberculosis is one of the few bacteria that, like viruses, infect directly from person to person. The Netherlands chose not to vaccinate the whole population with BCG because it would interfere with the Mantoux test. TTI and better disease management were considered more important for population health than vaccination. This approach resulted in the elimination of tuberculosis as an endemic disease.
​
Countries in East Asia and Australia are using similar strategies against SARS-2. TTI was also advised by independent experts in Lessons Learned from the Dutch ministry of Health. TTI is methodologically a lot more powerful than testing 10 million people every month, the strategy of several governments, including the Dutch. The difference resides in that tracing sources and contacts allows more frequent testing of people when they are at risk. Testing less people with a low risk of disease results in fewer false positive test results.

The EU countries has about six or seven different SARS-2 vaccines. Subtle differences between vaccines can have major consequences, because COVID-19 disease is caused by a less effective but strong immune response. I truly support of vaccination but have hesitations about vaccination against immune pathology. After all, before this crisis, we were barely successful in vaccinating against immune pathologies caused by viruses (i.e. HIV (AIDS), flaviviruses and corona cold viruses, bacteria with superantigen, allergens or autoimmunity. Thus, we need a new type of vaccine for good protection against COVID-19. If successful, the vaccine provides the principle for vaccination against other immune diseases, such as AIDS.