COVID-19 strikes hard in society. Some people consider the health of diseased and elderly people to be less relevant. It brings flash backs to the dark pages in European history. Personally, I know several people who had fatal COVID-19 and not all were old. A medical risk group is not the same as only the diseased and elderly. I personally knew a man in his fifties who passed away, but prior his disease he was still an active worker albeit having an increased BMI. People with a risk of cardiovascular disease do not always know this. Diabetes is also a risk factor. Diabetes and cardiovascular disease can also be the result from SARS-2 infection. A previously healthy person might have an increased risk after the first infection and be at increased risk of fatality upon reinfection.
​
No vaccine will protect everyone. The advertisements of Pfizer and Moderna herald over 90%; AstraZeneca says 70%; but according their protocol it is only 62%. Vaccines are likely to be less effective in elderly, because (i) of immunosenescence, (ii) the data from the AstraZeneca study, and (iii) the expert opinions like Marion Koopmans’. After vaccination, infection fatality ratio might fall to influenza-like levels, but could also be a bit higher, despite vaccination. Vaccines are a good asset, but not a magic bullet that would offer full protection form disease for everyone.

This question will not be resolved by press releases, but by the EMA decisions on submitted scientific data of RCTs. If vaccines indeed protect 90% protection without serious side effects, they would be well beyond expectations. Data science insights strongly suggests that such a huge effect should also be visible and probably significant on serious COVID-19, if the vaccine also offers effective protection against disease worsening. Most likely the EMA will also investigate this. 90% effectiveness would reduce the average death from COVID-19 from over 0.9% to 0.1%. That is slightly higher than the most severe waves of influenza.
​
How long will protection by a corona vaccine last when natural corona cold virus immunity only protects for a few months? The current RCTs cannot answer this question, because the only have a few months of follow up. T cells seem to persist longer after SARS-1, but we do not know if it suffices for protection. The proof of the pudding is in the eating: immunity is determined by (natural) exposure and not by immune parameters.

In brief, I think that a vaccine that cause a relevant reduction of COVID-19 mortality. We should not rely levels of antibody responses. People who are admitted to a hospital have 10 to 30 times as high antibody levels compared to those who remain ill at home (Figure 13). Infection and virus secretion in children occurs as often in adults, but they have less often (serious) disease and, according to Dutch research, also rarely have antibodies (Figure 14). The immunology of coronaviruses differs from many other viruses and is only partially understood. It can be argued that not every vaccine under development will have a positive effect on health, and some may have a negative effect and in exacerbating the disease. This should always be considered, especially when novel vaccines are produced according to different immunological principles. Europe should wait for the scientific data to be evaluated by the EMA.

After registration, the vaccine manufacturers should produce sufficient vaccines, and governments should mount an unprecedented logistical operation to vaccinate everyone. An optimistic estimate says this will be finished by the end of 2021. The question then is how long the vaccine protects, hopefully longer than the protection after infection.

Meanwhile, it is crucial to limit the epidemic and its impact terms of morbidity and mortality. Vaccines are unlikely to help limit the spread of disease since the immunity they induce is not sterilizing and will not yield herd immunity. People could be protected by lockdown measures, but the combination of testing, tracing and isolation has been proven to be more effective and better for society and economy. Safety of vaccines is only evaluated in people free of a COVID-19 infection.

Figure 13. Antibody levels in people admitted to hospital (red) and not (black).
N = nucleoprotein; S1 part of Spike protein. RBD is the receptor binding domain of the Spike protein. 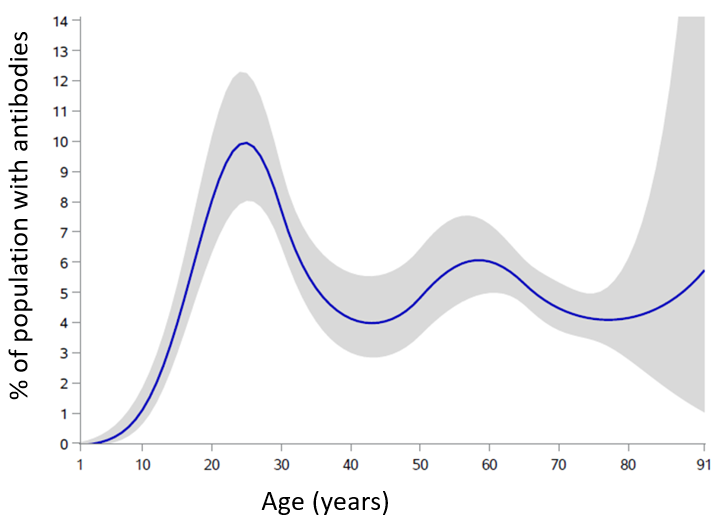